In the spring of 2016, as a follow-up to the VDS, the Neighbourhood Planning Group distributed two questionnaires, one to all households and the other to all businesses in Strensall with Towthorpe. After analysis of these it became clear that there were several key isses that were of particular concern to many respondents.Most of these key issues are linked to some extent by a common theme – lack of adequate infrastructure – so this will appear, partly in different forms, under more than one heading.

There was a large body of opinion that the village was already suffering from over-development and lack of supporting infrastructure, including adequate roads, primary school places, shops and amenities, public transport and drains.

There was strong opposition to building on green belt land, and a fear that further large scale development would lead to ever-increasing urbanisation. At the same time there was concern about truly affordable property to buy or rent, so young people might have to reluctantly leave the village while older people wanting to downsize could be stranded in over-large or unsuitable property. 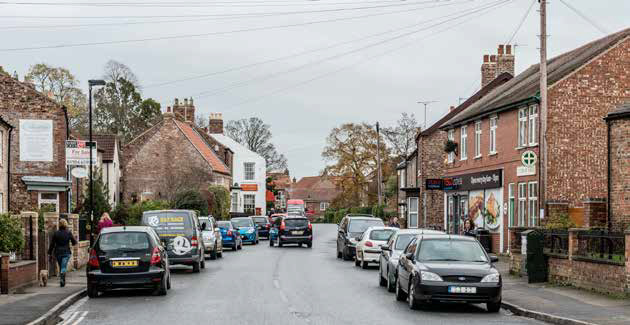 a). Different types of traffic problems often interact with each other, so it is difficult to quantify specific areas and problems. The main subjects commented on were lack of parking space, the effect of parking on traffic congestion, speeding, the high volume of traffic at peak periods (especially noticeable at the times of the school run), the amount of large vehicles trying to pass on narrow roads,and concerns about road safety, especially in view of the total lack of pedestrian crossings.

b). Cycle Paths. Comments were made on the lack of cycle paths to and from the ring road, between Strensall and York, and linking Strensall and Towthorpe..

c). Public Transport. There was general concern about public transport, and fear of losing the one bus service we have (5/5A). There is no direct service to Monks Cross, Clifton Moor/Tesco, Haxby, Wiggington, or the Vangarde Centre – you have to go into York and out again to get to these destinations. Suggestions were made that the no.20 bus could link Clifton Moor, Haxby, Strensall and Monks Cross, and that the decommissioned railway station at Strensall could be brought back into use. Such measures could also reduce the volume of traffic on the roads.

Many respondents felt that as the village had grown, the services and facilities had decreased. A number of small shops had closed over the years and not been replaced. The recent closure of the Post Office in The Village, and it’s replacement by a small facility within the Londis convenience store on the very edge of the village, has been felt to be a loss not only in terms of accessibility and quality, but also because the previous Post Office was a place that functioned as a social space.

It was felt that a bank and more small shops were needed, and also a variety of places where people could meet and socialise as well as possibly having a snack or meal – eg: a café, coffee or tea shop, restaurant, mother’s meet – up group. There were fears that the public library was under threat of closure.

Other areas of concern were a shortage of facilities for sporting activities and to meet a need for more activities for older children and young people.

Respondents expressed concerns about the inadequacy of systems to cope with drainage, sewage and flooding, and fears that further development would greatly increase pressure on these already overloaded systems.